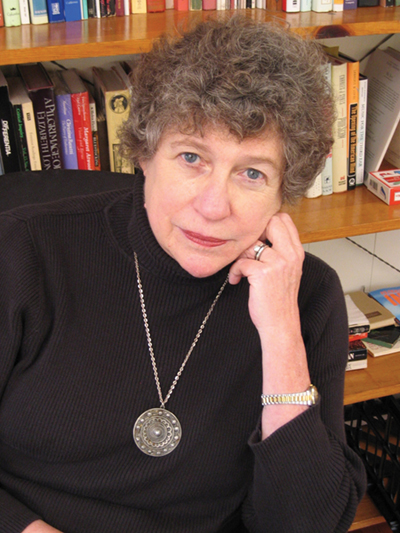 This year's Cody Award winner is poet and critic Sandra M. Gilbert. She has published numerous volumes of criticism, in feminist literary criticism, feminist theory, and psychoanalytic criticism. She is best known for her collaborative critical work with Susan Gubar, The Madwoman in the Attic: The Woman Writer and the Nineteenth-Century Literary Imagination, widely recognized as a central text of second-wave feminism. Joyce Carol Oates said of it, "The Madwoman in the Attic, originally published in 1979, has long since become a classic, one of the most important works of literary criticism of the 20th century." Carolyn See called it "A masterpiece" in the Los Angeles Times Book Review. Gilbert co-edited, with Susan Gubar, The Norton Anthology of Literature by Women, Shakespeare's Sisters: Feminist Essays on Women Poets, and co-authored No Man's Land: The Place of the Woman Writer in the 20th Century (in three volumes), among numerous other works. Sandra Gilbert edited the just published Essential Essays: Culture, Politics, and the Art of Poetry, a career-spanning selection of the courageous and boldly political prose of National Book Award-winning poet Adrienne Rich. Also a poet, Sandra Gilbert's tenth book of poetry, published in 2019, is Judgment Day. She has received many awards, including, in 2017, an honorary doctorate from Harvard University, and in 2012, together with frequent collaborator Susan Gubar, the National Book Critics Circle's Ivan Sandrof Lifetime Achievement Award. Distinguished Professor of English Emerita at the University of California, Davis, Sandra Gilbert lives in Berkeley, California.

The nominees and winners are: