Program includes readings and remarks by this year's award-winning authors 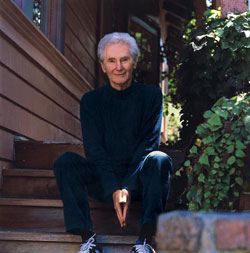 Willis Barnstone was born in Lewiston, Maine, in 1927, and educated at Bowdoin, Columbia, and Yale. He is author or editor of more than seventy books over six decades of publishing. His brand new book of poetry is Moonbook and Sunbook (Tupelo Press). Mexico in My Heart, his selected poems, is forthcoming in 2015. His huge range of publications include Modern European Poetry (Bantam, 1967), The Other Bible (HarperCollins, 1984), The Secret Reader: 501 Sonnets (University Press of New England, 1996), a memoir biography With Borges on an Ordinary Evening in Buenos Aires (Illinois, 1993), To Touch the Sky (New Directions, 1999), The Poems of Mao Zedong (University of California Press, 2010), and The Gnostic Bible (Shambhala, 2010). His literary translation of the New Testament is The New Covenant: The Four Gospels and Apocalypse (Riverhead Books, 2002). A Guggenheim fellow, he has four times been nominated for the Pulitzer Prize in Poetry, and has had four Book of the Month Club selections. His poetry has appeared in The Paris Review, The New Yorker, Poetry Magazine, The New York Review of Books, and The Times Literary Supplement. His books have been translated into diverse languages including French, Italian, Romanian, Arabic, Korean, and Chinese. He taught in Greece at the end of the civil war (1949-51), in Buenos Aires during the Dirty War, and during the Cultural Revolution went to China, where he was later a Fulbright Professor of American Literature at Beijing Foreign Studies University (1984-85). He is Professor Emeritus at Indiana University and has lived in Oakland, California, for many years.

NCBR RECOGNITION AWARD (for a literary organization, or exceptional book that falls outside category)
The Heyday of Malcolm Margolin: The Damn Good Times of a Fiercely Independent Publisher, edited by Kim Bancroft, Heyday

The winners will be announced at the Awards ceremony on May 3, 2015. Free admission; open to the public. For more information: Poetryflash.org, 510.525.5476, NCBR@poetryflash.org.