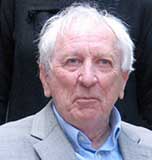 
Swedish poet Tomas Tranströmer, winner of the Nobel Prize in Literature, is receiving the kind of attention Swedish poets haven't received in some time. Now eighty, he is one of the few Swedish poets to be recognized for their poetry. The last Swedes to win a Nobel Prize for Literature were Eyvind Johnson and Harry Martinson, who shared the prize in 1974. It wasn't until American poet Robert Bly translated Tranströmer's work that he was able to attract a small U.S. following.

Tranströmer has published fifteen collections of poetry, translated into over fifty languages—including English. His other awards are numerous, including the Swedish Award from International Poetry Forum, the Petrarch Prize in Germany, the Oevralids Prize, the Bonnier Award for Poetry, the Lifetime Recognition Award from the Griffin Trust for Excellence in Poetry, the Aftonbladets Literary Prize, and the Swedish Academy's Nordic Prize.

Formerly a psychologist until he suffered the stroke in 1990, Tranströmer primarily practiced with juvenile prison inmates, drug addicts, and the disabled. A well-known poet in Sweden since he was twenty-three, his poetry focuses on human alienation. His work is influenced by the highs and lows of Tranströmer's own lifetime, from a post World War II childhood to later recovering from the stroke. University of Washington professor of Scandinavian poetry Ia Dübois, in a discussion about the poet on NPR's "All Things Considered," describes Tranströmer's writings as containing a landscape of "…loneliness and it is often the lonely child, the lonely man. And through his works, you feel that aging and how he relates to the human condition at each step of life."

Daniel Halpern, publisher of Ecco, an imprint of HarperCollins, says in reference to Tranströmer's poetry, "So much poetry, not only in this country but everywhere, is small and personal and it doesn't look outward, it looks inward. But there are some poets who write true international poetry…"

Watch this poignant interview with Tomas Tranströmer, his wife, and his piano after being notified that he had won the Nobel Prize for Literature: http://www.nobelprize.org/mediaplayer/index.php?id=1638


Lauren Peck is a graduate student in the MFA program at San Francisco State University.