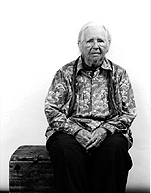 
My friend francEyE died this last June 2, 2009, at 87 years old. Besides her considerable talents as a poet, she was known both in the Los Angeles and Bay Areas as an indefatigable habitué/participant in innumerable poetry readings and workshops. francEyE was already bearded grandmother-looking when I first met her in '88, one of the first people who noticed that I hadn't been at the Beyond Baroque workshop before. She would do a punctuating hum as someone read their poem. Looking very stern, she would then tell you that you had forgotten to sign your name, that your poem had too many adjectives, and that it didn't make any sense to stick a block quote from a Fiat mechanics' manual into your poem of disconcerting love and annulling sex (she was hard, very hard). Or she might simply love your poem and tell you not to change a thing, and if you crossed her, told her to lighten up, bad things would happen to you. Like Macbeth's witches, or the hall monitor in middle school, she didn't do grandmotherly, nor old biddy, she simply did francEyE.

Francis Dean Smith, a.k.a. francEyE, came to LA in the early 1960s, born in San Rafael on March 19, 1922. She had just gone through a difficult marriage and wanted to pursue writing more fully. In LA she involved herself with the poetry/writing scene then percolating in west LA. Initially, francEyE, along with Charles Bukowski, would attend workshops of the Unitarian poetry group through the mid-1960s which morphed eventually into the now long running Beyond Baroque workshop. Contrary to stereotypical ideas of Hollywood, the entertainment "industry" there was and still is a vibrant, intense sub-culture of writing that has at its anchor point the public literary arts center in Venice, Beyond Baroque, in which she has been active, in one form or other, since the mid-60s. francEyE was a constant and foundational member of the weekly poetry workshop at Beyond Baroque. Through the late 1980's and early 90's this weekly workshop, run by Bob Flanagan and Mark Robbin, would have an amazing assortment of characters at all levels of poetry show their wares. francEyE was always there, through the LA equivalent of hell or high water. Indeed, there was a wonderful synergy between francEyE, Bob and Mark, they all provided a steady rudder during sometimes very strange, chair-throwing nights. . .ah those romantic poets. Through this all, francEyE would remain ever hopeful, on the edge of her seat waiting for the next poem, whether it was from the new Bukowski or someone who treated the workshop like an AA meeting.

francEyE could trick you into thinking her seemingly natural sounding language was casually created, as if she was simply jotting down what randomly came to her. To the contrary, she was meticulous in her phrasing and imagery. Hearing her read, you would immediately notice the music and force of her language. She compressed her life into poems, stamped her sense of the day into the eternal book of words. francEyE wrote of her notions, curiosities, she would almost surprise herself (as much as the reader), with questions she would come across as she rummaged through the day. There is always this questioning manner of a precocious child in her work crossed with an uncompromising self-examination and rigor. When she applied her pen to actual children in her life, a magical comingling of beginner's eyes and wisdom unleashed a joy that is the rarest kind of thing to find in poetry:

For My Birthday Someday

To N.H.B Sahoo (her grandson)

Start in Art At One

I watch you making water on the rug,
sitting round-backed
to see your pee run out.

You put your finger in it to stopper it,
and then, forgetting fingers,
stop it at the source,
hanging your head 'way down'
to see if you can see
what you are doing.

On, off, on again.
I think I read your mind,
imagining a room-sized flood
for us to sail our shoes on,
but, after all, your tiny, finished work
Seems enough.

The sponge I offer puzzles you.
- Wipe it up?
- My puddle?
so we admire together
this temporary spot
on the face of things
that you made by yourself

Each of these poems captures her generosity and the unpredictable place she will take you to. She has the ability to look at this thing here, mull it (take you along as she mulls) and make it more and less familiar than you can imagine. Like a magician who "shows" you the trick, still leaving you baffled and amazed. In short, she enlivens and does the work poets do. No surprise, and no surprise either that she did this without garnering any great notoriety; she worked in the trenches. This is something she did for almost fifty years of her life. And by so doing, she has tremendously enriched poetry on the West Coast.

Besides the rich memory of her active presence on the California poetry scene, francEyE has been widely anthologized and has three books of poetry and one of short stories published, Snaggletooth in Ocean Park (1996, Sacred Beverage), Amber Spider (2004, Pearl Editions), Grandma Stories (short stories, 2008, Conflux) and her last book, Call (2008, Rose of Sharon). In 2004, she was honored in Santa Monica with the Church in Ocean Park's Communitas Award. francEyE was a proud, non-strident lefty pacifist who believed poetry was a change agent: "My job is to be myself and encourage people to be themselves. Things aren't going to change until people change, one person at a time."


Robert Lipton's book of poems is A Complex Bravery (Marick Press). His poems have appeared in New Orleans Quarterly, the Texas Observer, and elsewhere. He writes as a journalist for the blog Muzzlewatch.org and published the essay "Bearing witness in the promised land" in "Live from Palestine." He also writes on the philosophy of science/causation. He now lives in Boston.