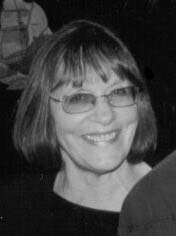 She is one delicious woman.

Manna flows out of her pen.

(from "Glory, Glory Menebroker!," to the tune of "The Battle Hymn of the Republic," written by Mary Zeppa for Ann Menebroker's 70th birthday)

AND INDEED IT DID: manna, wisdom, wry and lively humor and the kind of plainly spoken home truths all too seldom set down in a poem. When Annie Menebroker died on July 9, our poetry community lost both a unique poetic voice and one of the warmest hearts it's ever been my pleasure to meet.

Full disclosure: we were friends. Friends–through thick, thin and everything in between–of nearly four decades. I often say that I was "not quite present at the creation" of the Sacramento Poetry Center. While Annie wasn't one of the original crew (who held readings in coffee shops and people's houses, who helped take-down-to-the-walls-and-create-anew our first "home" at Sierra 2), she got there before I did. And she'd been on the "poetry scene" for quite awhile before that. Annie and Joyce Odam met in a poetry class in the '60s. To quote Joyce's recent reminiscence in Medusa's Kitchen: "She is my 'original poet' friend. We were fledglings together."

By the time I met Annie (sometime in the 1970s), she was fully fledged: already both a widely published poet and an experienced editor and publisher. But so low-key and unassuming, so modest—Jane Blue once (if memory serves) called her "the most egoless poet I've ever met"—you'd never know it. We became fellow SPC volunteers and Board Members. Annie served as, among many other things, our Librarian. She also (with Doug Blazek and C. K. Dobbs) edited our first anthology (a much bigger deal in pre-computers-everywhere days) Landing Signals. She was with us when Robert Bly came (twice) to read. With us for our first conference (held at California State University, Sacramento) featuring William Stafford, Sandra McPherson and Dennis Schmitz. And she was with us (ah, the vagabond years) when we moved out of Sierra 2 and into a much less settled future.

Even after Annie left behind Board membership and active volunteering, she was a steady and supportive presence in our poetry (our arts) community. In the last decade, after her eight-plus years ago diagnosis with liver cancer, Annie was a wonder. She decided that if she was going to live, she was going to LIVE. And she was everywhere, taking it all (poetry, music, theater, art) in, cheering us all on.

Annie never stopped writing and publishing. In recent years (far as I know) she never "submitted". But plenty of people asked her for poems. A chapbook, intended to commemorate her eightieth birthday, arrived the week after her death. Now and again, she'd get up at an open mic. Once in a great while, she'd succumb to somebody's blandishments and take a brief spin as a featured reader.

Early in 2013, I persuaded Annie we should start taking regular walks in McKinley Park. First once, then twice, a week, for three years, we circled the park proper and the Garden and Arts, walking and talking, laughing and condoling, finishing it off with more talk on "our bench" facing the duck pond. We talked, no holds barred, about anything and everything. It enriched and deepened, beyond measure, our friendship. Each of us wrote poems about that park, those walks. Just before I left for a February-March writer's residency in Illinois, we celebrated our third anniversary with breakfast at Orphan and a victory lap. We were incredibly pleased with ourselves.

Like so many people in our community, I loved Annie very much. I'd like to say we had a special friendship. I imagine many people reading these words would say the same. And we'd all be right. Because, as Jane Blue so perfectly said, "Annie had a talent for friendship."

When our history is written,

there'll be more than one doyen

but there's only one Miss Ann.

Reprinted with permission from Poetry Now, A Quarterly Publication of the Sacramento Poetry Center, poetrynowblog.wordpress.com.

Mary Zeppa is the author of My Body Tells Its Own Story. She is a singer, lyricist, poet, literary journalist, and a founding editor of The Tule Review. She has been active in the Sacramento Poetry Center since 1981.